One year after receiving the highest honour, along with a GOLD award, TCi looks back at some of the challenges and achievements.

Continuing our work as Tier 1 FF&E contractor to one of Europe’s largest construction projects, EDF Energy Hinkley Point C, our embedded team have been space-planning, supplying and managing furniture facilities to cope with the growing workforce which is expected to peak at nearly 10,000.

In December, TCi was awarded the Gold Ribbon for Supply Chain Collaboration at the HPC Excellence Awards, outlining the over-and-above attitude to service delivery adopted by the team.

The equipment installation includes a fully functional gym and meeting facilities, combined with a large restaurant/canteen area, the two well-appointed bars and recycled, maintenance-free outdoor seating, with every aspect of the furniture provision space-planned by TCi.

Just a few of the sites we have attended over the past 12 months:

In December, Select Site Services (Laing O’Rourke) engaged TCi to supply and install lockers, benches and canteen units for over 1000 site operatives at their Manchester Airport site. The setup is for their £570m contract as part of the £1bn Manchester Airport Transformation Programme.

TCi has a historically supplied furniture to the Sellafield site and returned in January to provide additional office and canteen items for around 100 Morgan Sindall operatives.

Attending the site of London Docklands Silvertown regeneration scheme in March, TCi delivered lockers and canteen furniture to Galliford Try. The £3.5bn scheme will eventually see 3000 new homes built on the site alongside shops, restaurants and a live music venue.

Following the installation of office and welfare furniture at Thames Tideway Scheme’s central office in Battersea, TCi furniture WORKS was engaged to supply equipment to several other sites along the project, including Victoria Embankment, Blackfriars, Chelsea Embankment and Heathwell Pumping Station. Thames Tideway Scheme is a 25km ‘super sewer’ underneath the river to carry the city’s waste water for the next hundred years of growth.

Throughout the year, several visits were also made to the Tottenham Hotspur Stadium development, supplying welfare equipment for the site, including the installation of a hanging basket system which saves space over traditional locker arrangements for site operatives.

In April, we provided a comprehensive office setup at the stunning One Nine Elms development for Multiplex, including workstations and meeting facilities for over 150 staff. The project to build two towers of luxury apartments and a 5 star hotel is due to complete in 2022

In September, TCi installed 47 Bouygues UK-branded ECO360® desks to the site accommodation facility for Cavendish III – a ground-breaking project to build a new physics research facility at Cambridge University. The French-owned contractor is embracing sustainability on every aspect of the site, to achieve a maximum BREEAM rating of “Excellent”.

Following the appointment of Mace Group at the iconic Battersea Power Station redevelopment, several large-scale office moves were undertaken by TCi. The complex nature of the move meant that it had to be broken up into several phases to accommodate the volume of furniture and the client’s timescales. A flexible working partnership was vital to the successful completion of the move, with logistical and security constraints at play. Due to the complexity and scale of the project, not everything went smoothly, but TCi maintained dialogue with the client to achieve all objectives.

Another airside project took place in October, this time at London Heathrow Airport’s Terminal 2 KAD Tunnel Box. Part of the UK hub’s integrated underground baggage system, set to link all 5 terminals. With our experience of high-security environments and the flexible logistics required to undergo inspections and vetting, the full furniture scheme was delivered in two phases as the project progressed. The first installation included wire mesh lockers, changing room benches and canteen units for more than 250 operatives, whilst the second instalment provided a fully operational site office for 50 staff.

In November, 326 mesh lockers, single & double sided benches, canteen seating units for 120 persons, meeting room furniture supplied to site for Strabag SE. Lead times and delivery arrangements were a key consideration of the product offering as each item needed to be readily available in quantity. Once again, the delivery was phased into two separate installations to suit the client’s requirement and meet the tight deadlines. This outlines the flexibility and dedication of TCi to ensure projects are completed to the highest standard, taking into account the needs of all stakeholders. Yorkshire potash mine developer Sirius Mineral signed up Austrian civil engineering giant Strabag for the first of three big tunnel drives to transport excavated polyhalite mineral underground to the coast.

It’s been great to meet with the construction community at exhibitions and events! 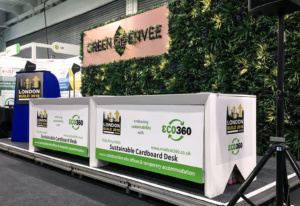 Once again, TCi furniture WORKS and ECO360® exhibited at London Build Expo, with a number of cardboard desks featured on the summit stages. Situated within the Sustainability Summit, TCi enjoyed a steady flow of visitors with ECO360® featuring as the star of the show.

As ever, everyone was impressed by the sturdiness and aesthetics of a desk made from corrugated cardboard. “You wouldn’t even know!” said one visitor.

In September, TCi was invited to CodeNode London to exhibit at the Considerate Constructors Scheme’s #ImageOfConstruction summit. The event brought together leaders in sustainability, diversity, safety and mental health. ECO360® was extremely popular and caused excitement with visitors and exhibitors.

It has been a fantastic year in construction for TCi furniture WORKS and we look forward to continuing the high standard of service delivery that won us the accolade of Most Considerate Supplier everywhere we go.